The weather here has been absolutely awful. One day it’s snowing and the next day it’s raining. I’m so annoyed about it because we don’t have an indoor arena. I literally haven’t been able to ride for two weeks. During this time off I’ve still gone out and spent time with Diamond though. I’ve lunged when the ground isn’t too hard nor too muddy. When I lunge I let her go five minutes on each rein to loosen and warm up before hooking her up in the Pessoa Training System. This lunging aid is used to help horses learn to go into frame and work over their backs. I’ve been using this tool since mid-October and there’s a very obvious difference in how Diamond moves and carries herself. She’s learned to stretch down and work as a well-rounded dressage horse. 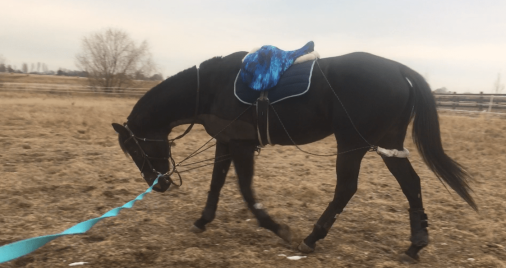 When I first used this ‘contraption’ on her, as my mom calls it, I let it stay quite loose. Diamond was going on light contact with the system asking for only an inside bend. This means that the inside ‘rope’ was slightly tighter. As she got more comfortable in it, I tightened it so that she was going on a bit heavier contact. It takes a bit for her to warm up into frame but once she’s there she isn’t leaning on the bit nor the forehand. Both of those things were our biggest problems a few months ago. 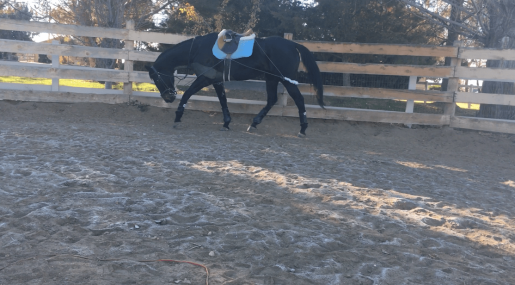 Lunging aids and riding tools are commonly misunderstood. I used to absolutely despise bits until I realized that if they’re used correctly, no damage is done and all horses are different. Same thing with lunging aids. The Pessoa training system and other aids like it are typically misjudged. No, they don’t hurt your horse or make them unwilling to work. They actually ask your horse to put themselves into frame and to push under with the hind end. If your horse stretches down, that’s completely up to them. With Diamond though, the system was asking and receiving things from her that it seemed I couldn’t get. Both pictures above are of her willingly stretching down.

Coincidently as I’m writing this, the rain that’s been coming down for the past two days has stopped. Maybe tomorrow will bring a great ride.

View all posts by Equestrian Insight